Property prices in Turkey are growing at the second highest rate of all major world economies after Hong Kong, according to the latest Economist Global House Price Index, published in October.

And sales to foreigners increased by 23.8 per cent in October compared to the same month of the previous year, according to data released by the Turkish Statistics Agency in November.

Last month, the government announced that Turkey will emulate EU countries such as Portugal, Spain and Greece by offering residency to foreigners investing in the country.

According to Turkish property agency Universal21, this is likely to boost the property market to an impressive extent – especially in Istanbul, Turkey’s jewel in the crown.

The city, which straddles the continents of Europe and Asia, boasts majestic waterways, monumental architecture and a historic centre listed as a UNESCO World Heritage site.

It’s been the dramatic backdrop for several James Bond films including From Russia with Love, The World is Not Enough and Skyfall.

Indeed, it will have welcomed some 12.5 million visitors by the end of this year, making it the world's fifth most popular tourist destination.

Amid the tangle of motorways that criss-cross Istanbul there are leafy neighbourhoods fronted by boardwalks, parks and sandy beaches with low-rise apartments and houses.

Away from the coast, high-rise apartment and office buildings dominate the ever-mushrooming cityscape.

In the increasingly affluent district of Beylikdüzü, the cost of property is on an upward spiral.

“Prices in the area have risen by 20 to 21 per cent a year for the last five years,” said Adil Yaman, a founding partner of Universal21.

Conveniently located between central Istanbul and Ataturk International Airport, and a short drive to the Marmara coast, Beylikdüzü has plenty of new developments such as the recently launched Papatya Park Residence.

Phase one with 387 apartments of one to three bedrooms all with balconies is set to be finished at the end of 2016. Once completed, Papatya’s cluster of nine-storey buildings will be intertwined with walking trails, landscaped gardens, tennis courts, basketball courts and swimming pools.

There is no shortage of expensive properties throughout central Istanbul. Near Taxim Square, for instance, in the vibrant district of Beyoglu, a large new one-bedroom apartment of 103 sq m will set you back US$640,000 (£425,880)

Close to Beyoglu and not far from a popular Bosphorus marina is the area of Etiler, home to the British International School. Here, an older four-bedroom apartment on three floors in a tranquil setting is on the market for US$1.5 million (£998,223) 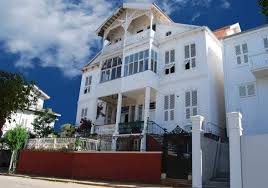 On the Istanbul island of Heybelida, a renovated Ottoman timber nine-bedroom mansion dating back to the 19th century is for sale by its British owners through Spot Blue. Converted into to four separate apartments, it is being sold fully furnished for £600,000.

Oceanic Bayview is a modern mainland development of 38 villas with panoramic views overlooking Büyükçekmece Lake and the Marmara Sea. Each US$1.5 million eco-friendly property features the latest smart-home technology and a swimming pool.

A word of caution about the purchase of Turkish property is that the measurement of interior living space may be listed as ‘net’ and/or ‘gross’. Net conforms to the rest of Europe while gross, especially true for apartments, may include anything from communal corridors to lifts.

Philip Skorochod, chief operations officer at Universal21, warned: “Due diligence is massively important. You need to work with professionals who are fluent in your own language, including tax specialists and lawyers.”

Citizens of most countries can purchase property in Turkey without impediment, and there is usually no capital gains tax if you sell your property after five years of ownership. For a comprehensive guide to buying property in Turkey, see the Association of Real Estate at gyoder.org.tr.

Over 2.5 million British nationals visit Turkey every year and when it comes to safety, the Foreign and Commonwealth Office reports that most visits are trouble-free. It does, however, warn that the threat of terrorism is high. There was a suicide bombing in Istanbul in January and two gun attacks in August. Explosions in Ankara in October killed more than 100 people.

However, Mr Skorochod said: "The bombing in Ankara has made little, if any, impact on the Istanbul property market. Prices continue to rise as demand increases from both local and international buyers." According to him, Universal21 saw a doubling of British enquiries in November compared with a year ago.